Edit on July 31st: Added some more skills and the kanji for the elements (which is useful when you’re looking at the skill descriptions. ^^). I also forgot to write about the vocabulary at the end of the descriptions which influence how often the special ability piece will appear on the board so they’ve been included too.
———— 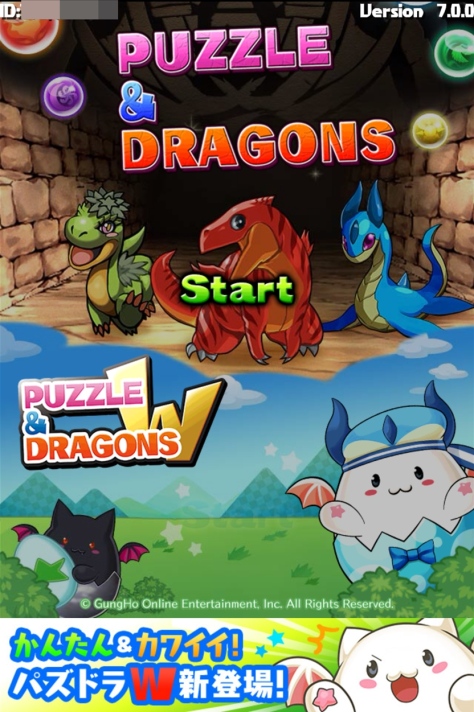 I’m not going to introduce Puzzle & Dragons again since I’ve already written about it over 2 years ago so this is written with the assumption that the reader is familiar with its rules and gameplay mechanics. :3 (There are more accurate and thorough resources on the Internet but that post should give you an idea of the game. The only thing I didn’t elaborate on was the fact that you can move your puzzle piece all around the board until the timer runs out because I didn’t know at the time. ^^)

Puzzle & Dragons W is a cutesy version of the main P&D game featuring the ever-adorable tamadras (or egg dragons) and pretty much plays exactly the same way as its companion game. The main gameplay difference is that each stage has an objective that must be met, along with combo strings, in order to defeat the devil tamadras that hold tamadra eggs hostage. One thing that’s unique to P&DW is the dress up system which allows you to customize your tamadra with various hats, items/toys, and egg shells! ^o^~ There are ample opportunities to gain new looks for your little avatar since the very eggs the enemies hold always contain either a piece of clothing or equipment. There are also the usual gacha lottery draws too~!

As this P&D update has yet to hit the English version, playing Puzzle & Dragons W may prove to be a challenge for anyone illiterate to Japanese. Although I’m not fluent in the language, I know enough to understand what needs to be done and what the equipment skills do so I decided to whip up this mini guide!

One of the things I noticed early on was that many objectives were simply variations of existing ones. Here are some important keywords. (All instances of X indicate a variable):

In later stages, X may refer to multiple elements.

Aside from the passing conditions, each stage also lists the type of elements that will be available in it. This is written as 登場ドロップ.

In case you forget or mix up an objective, the gameplay area actually shows it in some capacity.

Edit on July 30th: I forgot to mention that moves are finite in P&DW. Unlike Puzzle & Dragons where enemies fight back, the devil tamadras are pacifists! They just float around clinging to their eggs. The only way to get game over then is to use up all your turns. The amount of Turns available are indicated by the number next to the heart in the screenshot above. You can replenish/extend them by making combos with heart pieces or if a star piece with a heart in it shows up on the board.

At some point, the option to select Special Stage will unlock. At the time of this writing, only たまベガス! (Tama Vegas!) is available. The rules are different for this stage: there’s a little treasure chest sitting between your tamadra and your companion’s. The only way to open it is meet the requirement of getting rid of X number of orbs. The type of orb is different each time. While this is simple enough, you’re working against the timer that’s continually and rapidly decreasing. The only way to replenish it is by successfully making combos of hearts and by levelling up. Levelling up is conveniently achieved by creating combos of any kind. :3 When you complete an area, you will be rewarded with medals based on both how many you’ve accumulated during play and as a lump sum base amount! 😀 It seems like the initial chest reward is the largest though as subsequent plays yield a smaller amount of medals. 😦

Speaking about medals, it’s the sole currency that’ll get you new apparel and items for your tamadra~! So yes, while P&DW shares the same premium currency (known as Magic Stones/魔法石) as its sister game, they don’t have much use other than to instantly restore stamina and to increase the capacity of your friends’ list.

When you get your snazzy new piece of clothing or anything else that pops out of a gacha egg, you’ll probably want to put it on your tamadra. Dressing up the little critter can be done from the “change room” (not a literal translation of きやかえ).

The top option will be where all the hats are, the middle one is for stuffed toys, weapons, or anything the tamadra can hold in its hands, and the bottom lets you change its shell. When you’re browsing through your inventory, the name and ability description will be shown as scrolling text above the sub menu. I’ll list another set of keywords that’ll give you an idea of the skills below.

Here are the keywords for clothing and item abilities! (Again, the X is a variable.) I believe all of these appear in the form of a multi-colour star-shaped piece with a center image that indicates its skill.

Some of these skills may show up as X とX which means X-element and X-element.

You may also see “ランドム” in the description. It means “random”.

Other important words after each ability are as follows. These indicate the frequency of how often corresponding abilities appear.

There are more abilities but those are the ones I have at the moment. ^^ I may add the others as I come across them. :3

I think that covers everything. If there are any errors or some things you’d like me to address, please comment below. ^-^~

It's a wonder why the developer thought having a bunch of protection or escort quests would be fun for players. I haven't failed a single one but just find the sheer amount annoying. #DragonQuestHeroes #PS4
I finally got the third floor! :D Now to save up to get stuff for it. D: #tsukiadventure
Still on a #DragonQuest kick. Started playing through #DragonQuestHeroes again. (Actually doing it to see if I can figure out why I prefer this over the second game. Been playing for hours and haven't come to a conclusion yet. ^^) . 2nd screenshot: I love Alena's dialogue. XD Such maximally premium fun to read and hear! . Video clip: I couldn't even leave the arena to take out the mawkeepers because mobs just kept flooding in. :| I think this battle would have gone much better had I filled up everyone's tension and just musou'd the shit out of everything. I have a habit of rarely using the circle button. :P #PS4