More has happened since the previous post! I am now in possession of another copy of the game AND I have done some duping as well. I must say that duplicating items adds a whole new dimension to the game. In fact, time travelling and duping make ACNL even MORE fun.

The one thing that annoys me about Animal Crossing: New Leaf is that it plays a lot like a freemium game (sans the paid DLC or pay-to-win aspect) since it’s a game that has stuff happen in real time. (Of course, to some players, the slow, day-by-day pace  is ideal. I have a friend that loves the fact that he can unwind for a bit in-game and then go back to doing whatever he was doing before.) It also makes you do stupid shit like buy 50 flower bags and 50 saplings to unlock certain tools. I’m sure there are people that could make use of all those flowers and trees but I do believe most don’t. I think a better unlock for the silver watering can and golden axe would have been to plant x-number of trees and flowers since they’re needed to achieve perfect town anyway.

Then you have zany things like Gracie who apparently doesn’t have a set schedule in visiting your town so it’s possible you can finish all 4 fashion checks within a month; or it can take several months. It’s kind of infuriating when you have all the requirements to make her show up.

Gracie visited me twice in August, with August 15th being her last visit. She hasn’t come back since so I decided to do some research to see if it was possible to get her to show up faster with some time travelling. I found this useful post at The Bell Tree Forums: http://www.belltreeforums.com/showthread.php?87359-Time-Traveling-for-Gracie-s-Fashion-checks&p=1608691&viewfull=1#post1608691

I read that this method of rolling back the time to 5:59 AM and then letting it go into 6 AM to reset the day works with Redd and Katrina as well. I was curious about this so I tried the latter and I have to say that IT DOES NOT WORK FOR FORTUNE TELLING. Your fortune is fixed for that day. Basically, if you go back to Katrina whenever — whether it’s from resetting the day or after travelling 3 days into the future and back — she will just tell you your good luck item. I’ve yet to test it on Redd since I was too busy trying to get Gracie and also running around grilling the hell out of residents to see who might be moving. :E

Indeed, that’s the danger of rampant TTing! It’s really important to know that if you have 9 or 10 animals in your town, there’s every chance that one of them will ask to move out at ANY TIME. So many players end up losing residents because they don’t make the effort to talk to them after each shift in time. Yes, it’ll make the TT process longer but at least there’s a chance you can stop someone before they move out. To be on the safe side of things, it’s best to TT one day at a time. Also remember that a roll back to 5:59 AM on the same day equates to 2 days into the future, NOT 24 hours. This is really evident when you have a plot of land for someone moving in, turn the time back to 5:59 AM, and then after 6 AM, the resident is fully moved in. You will never have a chance to talk to the new neighbour while he or she is in his or her unpacking stage.

Another need-to-know is that the week seems to reset on a Sunday meaning that if you had X-number of special visitors during the week but you TT back to Sunday, you may not get them again. Or if you do, it’ll be on different days and they’ll have different offers/fortunes.  [Edit: This is hearsay. I have to experiment with this more.]

Anyway, back to Gracie! Something odd happened which I’m sure is pure coincidence! Here’s the time line of my experiment to get her to re-appear: 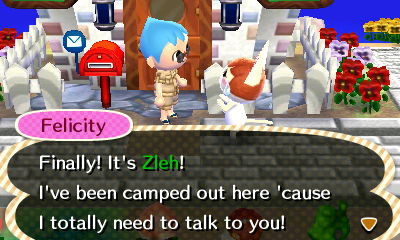 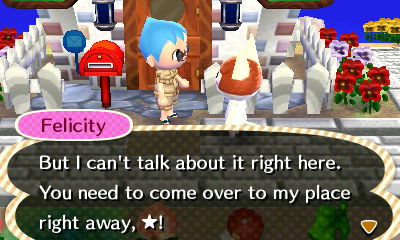 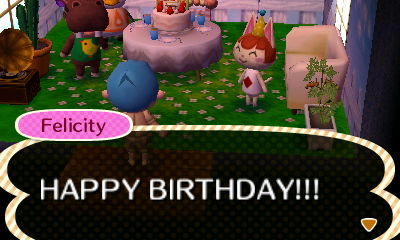 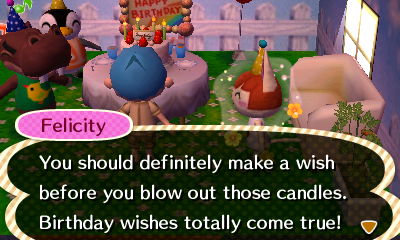 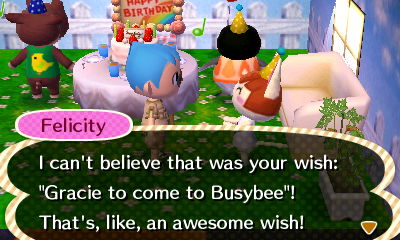 Because Felicity stopped my character from going ANYWHERE the moment he exited his house, I couldn’t check the plaza. However, I did so right after the party and … uh ….

I’m pretty sure this was a coincidence and not from the birthday wish. 😛 But what’s even more freaky is that Gracie appeared on the EXACT SAME DAY she was last in town! This has to be a fluke since my initial TT back to the 15th didn’t cause her to appear.

At any rate, I did the TT back to 5:59 AM after passing her fashion check and got a new fashion check once 6 AM rolled in. XD So yes! It’s possible to do all 4 fashion checks in a single day with this method! I finished my 3rd and 4th ones this way. XD Afterwards~

I happily skipped Saturday (thus blowing past the Bug-Off. I wasn’t in the mood to play it anyway) and went straight to Sunday, August 18th! XD 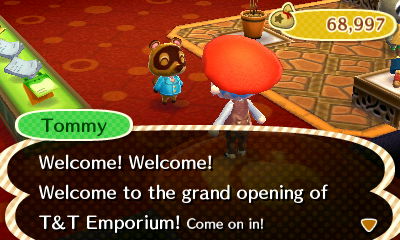 Oh, during the course of all this back and forth, I stopped Biff and Aurora from moving. :3 I can’t stress enough that it’s really important to stop each time and mash the A button against a resident. If one of them isn’t spilling the beans then move to the next. If about 3 or more of them aren’t giving you the rumour that someone’s moving then chances are no one’s trying to leave yet. Also, when you’re time travelling, NEVER ignore any “ping” (where an animal will run up to you and try and talk to you) that you come across. There’s EVERY chance that he or she will be giving a move-out date.

Incidentally, “restarting” August 15th didn’t get Zleh a second birthday party. I suppose it’s like Katrina’s fortune in that you only get one shot at it. 😦 I wanted another party. ToT~

Man, I wanted to write about my duping adventures (as alluded to in the first paragraph) too but I’ll save that for another time. :3

Edit: I tried the day reset when Redd was in my other town and IT WORKS! He has new artworks to sell. 😀 But, uh, yeah. Do remember that this causes the game to behave like you went a few days ahead so anyone moving out may have already moved out if you’re not careful. Likewise, anyone looking to move out may already be in boxes!

Hey View all posts by koukoupuffs

3 thoughts on “ACNL – Time Travelling for Gracie and Science!”

Solo'd my first Heroic difficulty Conflict Zone battle. :D #FinalGear
I've been playing #VampireSurvivors on and off for a few weeks now and just only learned about the methods to kill Death. EXP gem nerf only got me to level 67 and not around 100 like the guide in the wiki had. It still worked out just fine. :3
The programming and design teams on #FinalGear are on crack. After hours upon hours of maintenance, they not only DID NOT fix the Redeem Sequence Core button, they also managed made it impossible to use the backdrop from the Ghost in the Shell collaboration event.