This entry will be updated a few times within a 24-hour period~! Edit: I might not play the game today since my right thumb is kind of sore. I suppose I should learn to stop having characters roll everywhere. >_>

Edit on October 6th: Back to playing the game now … even though my thumb is still feeling a wee bit weird.

I just noticed that you can tap a character to change their battle tactics. .__O; 20+ hours in and I JUST discovered it. I actually used the Options menu to change it once or twice, but I suppose, with this way, you can select individual characters? Not entirely sure since I only have Adol right now. :E Edit: Actually, I wonder how I did it cuz I can’t get it to work again when there’s 3 people in the party. …….. OMG. It’s via the touchpad in the back of the Vita. (Just looked it up in the manual.) Slide two fingers inward to trigger the defensive strategy or two fingers outward for offensive. (Huh. Seems like the correct term for the defensive one is “Avoid” or more accurately “Ignore everything and follow the leader” because that’s exactly what the party members do. :P)

Edit on Oct 21: I finished the game today but there my treasure chest count was at 99.5% so I spent part of the afternoon trying to hunt down the remaining chest to get the Treasure Hunter (トレジャーハンター) trophy. It turns out that, because I never failed the dash across the orange tiles, I never knew about the area below. 😛 Look: 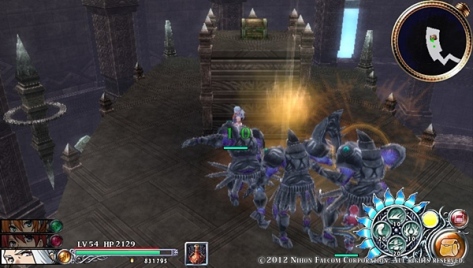 To get to this area, here’s where to drop: 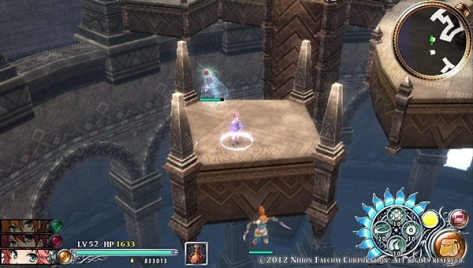 I’m not sure the side matters but I would go in the direction where Carna’s falling cuz that’s how I got onto the spot next to the chest. For what it’s worth, it contains an Elixir of Life (命の霊薬).